The Perfect Proposal - Couple Gets Engaged With a Watchfire Sign 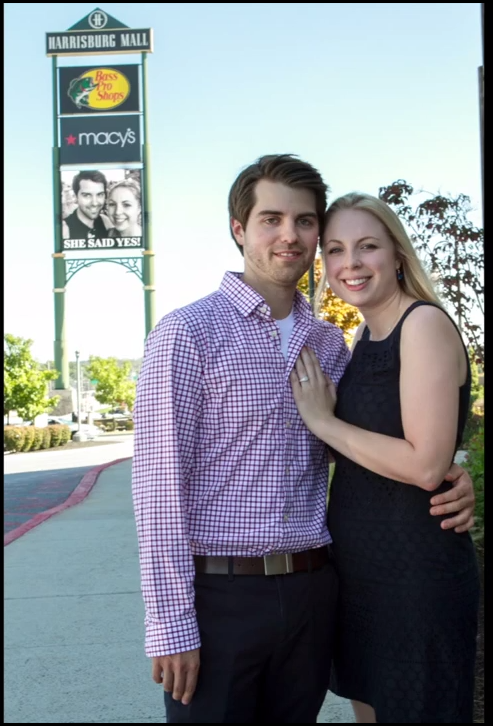 Watchfire signs are known to boost sales, promote specials and inform the community — but now the signs can add another use to the list: proposing marriage.

Justin Arndt, a janitor that works at the Harrisburg Mall in Pennsylvania, proposed to long-time girlfriend Liz Wine via a message on Harrisburg Mall’s 28-foot LED Watchfire outdoor sign, complete with an a cappella group, champagne, gifts and even a virtual fireworks show displayed on the sign.

The idea first came to the Harrisburg Mall Director Bill Russell, who has always held high regard for Justin and his tireless work ethic. Knowing Justin was thinking of a creative way to propose, Bill approached him with his big idea.

“I said, ‘So I know Liz is looking for you to do something ridiculous — what would you think about proposing during our 45th anniversary party using the Watchfire sign?’” said Bill. “Justin thought it was awesome idea and that Liz would love it.”

The planning of the proposal, however, didn’t pan out as easily as they had first hoped. The first hurdle they had to jump was the location. The 45th anniversary event was to be held both inside and outside the mall, with most of the activities taking place out-of-sight of the digital sign.

Because Bill is a man of “doing things right or not at all,” the mall management team moved the entire stage and podium to be directly in sight of the sign. Bill then devised a plan to get Justin on stage with his soon-to-be-fiancée by telling Liz he needed her help to bring Justin on stage to receive a surprise award.

“When Kevin from Strickler Signs sold us this sign, he told us the type of content we could put on is virtually unlimited,” said Bill. “So I basically said, ‘Kevin, you sold us with this, now it’s game on — you need to help me pull off this crazy idea with some amazing content!”

Kevin cued a special PowerPoint presentation on the digital billboard displaying glamor shots of the mall’s recent renovations. The final slide “proposed” a rendering for future construction before showing copy reading, “…and one more proposal today.” Two red hearts and the words “Liz, will you marry me?” scrolled across the screen.

Said Bill, “The end result was better than anything I could have asked for. It was exactly the way we hoped it would be and then some, and all with the help of a Watchfire sign.”