Take fan experiences to the next level with high-energy crowd prompts viewed on your sports facility’s LED video displays. 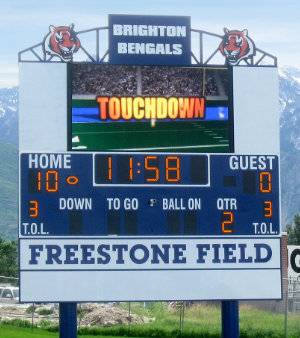 What is a Crowd Prompt?

A crowd prompt is a graphic or animation shown on video displays during a sporting event. Crowd prompts motivate spectators to cheer and get engaged in the action. It is a fun and familiar way to show team pride.

Prompts can be general messages, like Get Loud, Nice Play or Defense. They can also be sport-specific messages, like Three-Pointer (basketball,) Ace (volleyball,) or Corner Kick (soccer). Crowd prompts are any messages or graphics that move fans from their seats to their feet.

Prompts should inspire positive crowd behavior and never support poor sportsmanship. Avoid prompts that use derogatory or intimidating comments directed at athletes, officials or other fans. Make sure prompts are compliant with the Sportsmanship Policy for your team or facility.

Timing is also critical to good sportsmanship. It would not be appropriate to run a “Make Some Noise” graphic during an injury timeout, so it’s important to have software and an on-site operator who understands how to make quick responses to game conditions. Crowd prompts that are flashy can be distracting if they’re in an athlete’s line of sight. Avoid animations and rotating sponsor logos while a player is at the free-throw line or in the batter’s box.

Watchfire’s engineers kept this need in mind while creating Ignite Sports game-time software. This cutting-edge software lets operators have complete control over what plays and when. The operator can easily exit a playlist and reenter it later at the exact same spot. This feature means sponsor playlists aren’t constantly beginning over, so sponsor logos and messages are more evenly displayed throughout your event.

The best way to ensure positive sportsmanship among inexperienced or multiple operators is to create rules, review them, post them and stick to them. Here are some sample rules to run an effective program:

Getting Crowd Prompts on the Big Screen

When choosing a video display or virtual scoreboard, be sure it works seamlessly with your desired crowd prompt software and inputs. Watchfire video displays are engineered to effortlessly integrate with third-party components. Every Watchfire sports video display and virtual scoreboard includes Ignite Sports software and a large touchscreen interface for the operator. With a simple tap, you can add or switch any input, including live video and instant replays.

Choose software that gives you instant access to photos, animations and video. Game times can be hectic and not the best time to search for graphic files. With Ignite Sports’ playlists, favorites tab and built-in EasyArt library retrieving the right prompt at the right time is fast and easy.

Good software can also help you turn crowd prompts into sponsorship revenue. With Ignite Sports, you can display crowd prompts and an advertiser’s logo at the same time. In just seconds, you can create a sponsored crowd prompt like the “Johnson Auto Plaza First Down”.

Today’s fans are tech-savvy. They want an immersive experience that makes them feel part of the action. With a high-quality LED video display and responsive software by Watchfire, you can maximize the fun, and the revenue for every event on your schedule.