Over 600 auto dealers have discovered a new way to market their dealerships. Watch this video to learn how Bill Cole Automall and Mike Pruitt Honda have joined the Watchfire movement and reduced their advertising budget while growing sales.

Bill Cole added a Watchfire LED sign to his dealership and hit upon a winning formula for engaging with customers saying, "We know it's direct and targeted....people driving by seeing our sign are in their cars. And that's what our business is." Another auto dealer and Watchfire customer, Mike Pruitt, adds, "Every time we put a used car up...It sold." Watch this video to learn how Bill Cole Automall and Mike Pruitt Honda have reduced their advertising budget while growing sales. 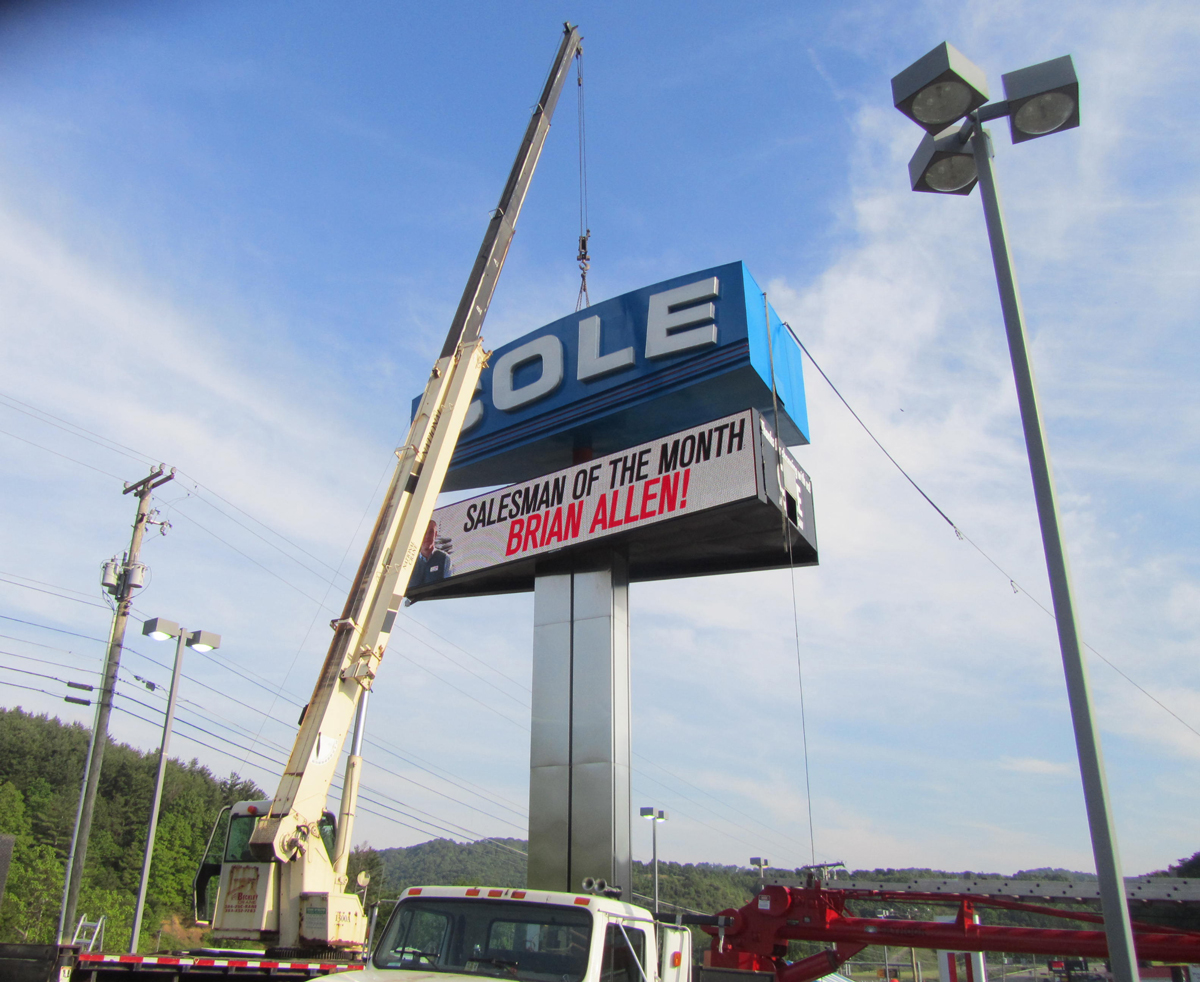 The decision to upgrade their old sign to a new Watchfire LED sign was easy for Bill Cole Automall — especially since the purchase qualified them for a $42,000 rebate from Appalachian Electric Power.  Mark Warner, Director of Marketing at Bill Cole Automall, noted that the sign has also been a great motivator for his sales team. “They are the ones outside looking at the sign all day and it gives them a sense of pride in the dealership. It’s an important reminder that they have a real edge over the competition.”

The team says the image quality of the sign is show-stopping. “We treat our LED sign like a TV commercial” declared Warner. He believes the sign is an important marketing tool because it allows the dealership to mirror events they advertise on TV. The dealership’s graphics department produces high-resolution video and animation that works seamlessly with Watchfire’s Ignite software. Warner explained, “We keep it updated so our customers always feel like they are always seeing something new – they never see the same thing twice.” The ability to capture customer attention, paired with significant cost savings, has convinced the team at Bill Cole Automall that their Watchfire LED sign was one smart investment. 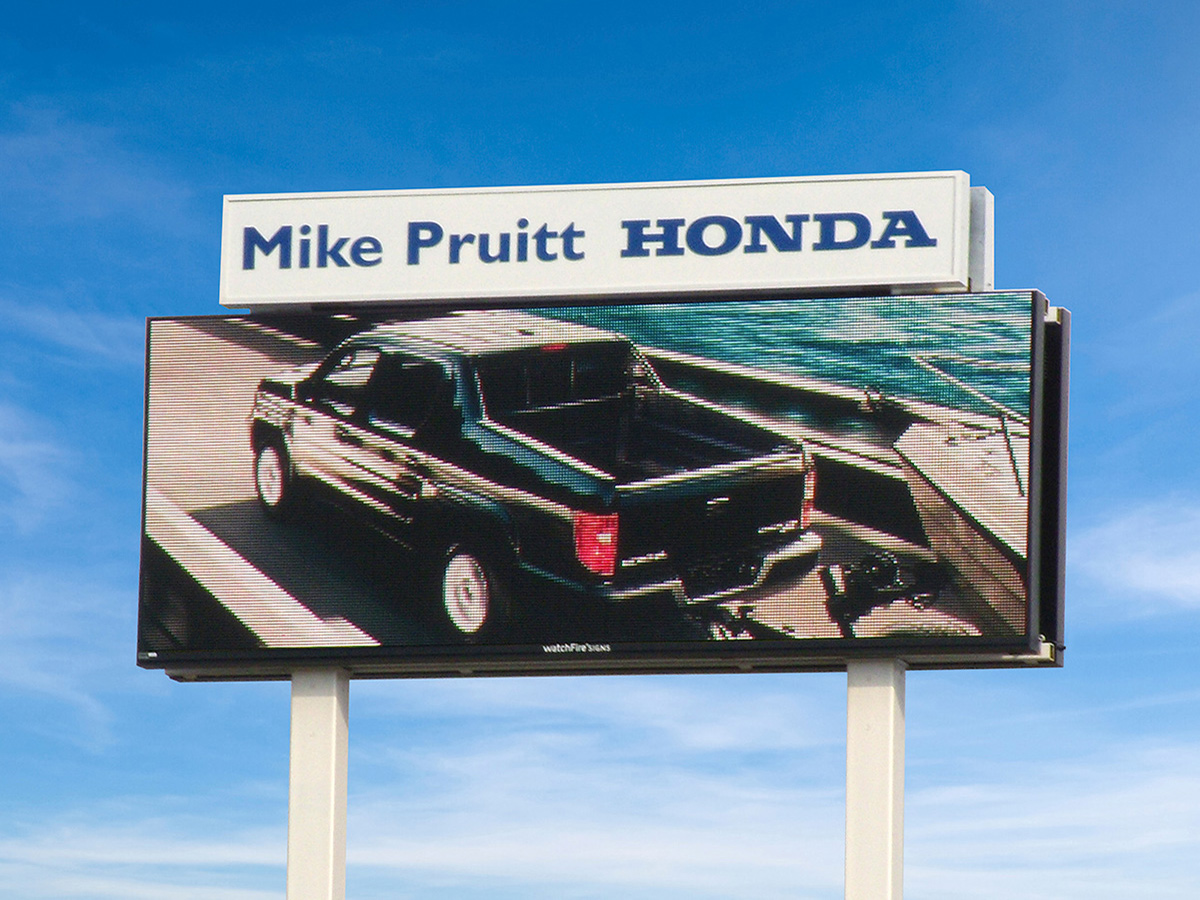 Mike Pruitt’s search for more effective ways to market his Honda dealership made him curious about LED signs. “I had been looking at digital signs for about 5 years,” said Pruitt. When he saw an LED sign at the Pro Football Hall of Fame, he felt a strong push to buy one and got in touch with Archer Signs for more information.

They suggested a Watchfire LED sign as a smart advertising investment. Pruitt asked questions about the sign’s construction and longevity since an LED sign was such a big change from his usual advertising methods. “The image quality of the sign and warranty were better than the others,” said Pruitt. After seeing an in-person demo and learning more about features such as Watchfire’s industry-best 5-year warranty, he made his decision. After the XVS 19mm color electronic message center was installed, Pruitt saw dramatic results. “Customers reference the sign when coming to get a car. It’s that top-of-mind awareness,” he said. The flexibility to change ads according to season or time of day is a big advantage over other forms of advertising. The dealership’s broad inventory of vehicles, services and products required an advertising medium that could be easily updated.

Sales have increased depending on what’s displayed on the sign, such as higher sales for windshield wipers and detailing services in the fall and winter. “We’ve actually reduced our advertising budget by using the digital sign,” Pruitt said. In addition to products and promotions, Pruitt Honda displays its social media contact
information on the LED sign. Kevin Pruitt, who manages the company’s social media accounts, uses Watchfire’s Ignite software to post the dealership’s Twitter, Facebook and Pinterest accounts to share car news, photos and deals with customers.

“It’s been a tremendous help when advertising service specials and targeting certain vehicles we need to sell,” said Pruitt. The Watchfire sign has helped the dealership reduce advertising costs by catching the attention of customers who are in a position to act on Pruitt’s message. Lower advertising costs and increased
sales have been a winning combination.

Learn how an LED sign can help increase traffic at your auto dealership.