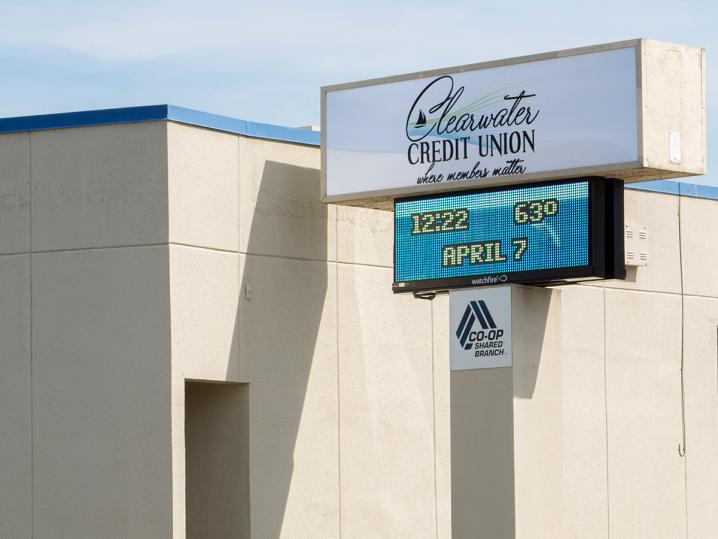 Clearwater Credit Union (CCU) in Lewiston, Idaho, installed a new Watchfire sign in 1993, not knowing that the sign would outlast all of the credit union’s employees at the time. For over fifty-five years, CCU has provided a variety of financial services to local residents. In 1993, they installed a state-of-the-art Time-O-Matic 5-Watt wedge base lamp, Model 7000 as a time and temperature message center. The sign and its original software (still on floppy disks) have outlasted two computers used to run it.

CCU’s President and CEO, Sue Darrow, began there in 1996, just 3 years after the sign was installed. In the 18 years she supervised the content and operation of the bulb sign, she noticed a slight slowing in the sign’s response time to updates, but it was otherwise still reliably promoting their services in 2014.

In 1932, Time-O-Matic began manufacturing rugged sign flashers that animated Broadway and New York City, as well as the incandescent time and temperature displays that lit up streets throughout the country. By 1993, the company was still exclusively serving the sign industry, building message centers like the one purchased by Clearwater Credit Union. Known today as Watchfire Signs by Time-O-Matic (or simply Watchfire Signs) the company manufactures outdoor LED signs and digital billboards in the same factory where CCU's bulb-based sign was built 22 years ago.

When replacement light bulbs started to run out, CCU decided to upgrade to the latest technology, not only to maintain their image but to better serve their members. They can generate more dynamic content than ever before using Ignite software, included with their new LED sign. Ignite’s EasyArt library includes over 1,000 animations and still images, which gives them endless options.

CCU’s new 19mm, 29" x 7'3" LED message center has the added bonus of tremendous energy savings that they’ll experience immediately, and over the lifetime of their new sign. And if history is any indication, it will be a long lifetime. “We are delighted with our new sign. The clarity and brightness of the content is amazing. It is a great advertising method for our credit union and we look forward to enjoying this sign for many years,” said Darrow.

Allen Phillips, with SignCrafters, Inc., was the original salesperson for their sign, and he’s been helping them maintain it ever since. “There was no question that CCU wanted another sign from Watchfire,” say Phillips. “SignCrafters has been a Watchfire dealer for more than 25 years. We are happy to continue our relationship with Clearwater Credit Union with another quality product from Watchfire.”

Get a Traffic Analysis
© 2022 Watchfire Signs, LLC. All Rights Reserved.