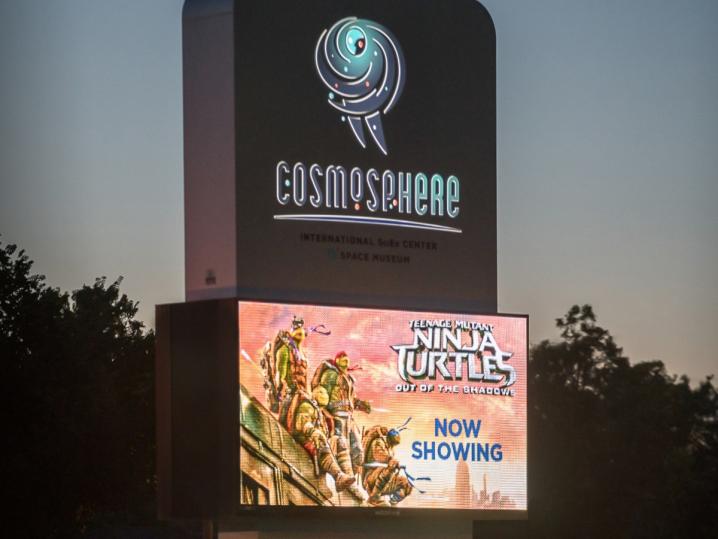 Cosmosphere International SciEd Center & Space Museum in Hutchinson, Kansas is one of the largest space museums in the world. The 105,000 square foot facility houses a significant collection of Russian/Soviet space artifacts, including a Vostok and Voskhod spacecraft, as well as the U.S. Apollo 13 command module, Odyssey.

Beginning as a temporary planetarium at the Kansas State Fair Grounds in 1962, Cosmosphere today is located on the campus of Hutchinson Community College.

Cosmosphere replaced their faded vinyl sign with a monolithic pylon featuring a digital message center from Watchfire Signs. The sign is affectionately called “Bertha” by the museum’s marketing department because of its size.

“The previous display was static and didn’t positively reflect what was going on inside Cosmosphere,” said Tom Sellers, CEO of Luminous. “The new 10mm digital display is dynamic and exciting, and serves as a physical manifestation of the museum's mission.”

The high resolution sign displays trailers of films being shown in the museum’s Carey Digital Dome Theater, including first run Hollywood films and scientific documentaries. It also promotes photos of kids at the museum's space camps, photos of artifacts, and messages about workshops, speakers, fundraisers and gift store sales.

The museum is located at an intersection with daily traffic to local schools. Mimi Meredith, the museum’s vice president of development and marketing, considers the new sign the museum’s “greatest point-of-sale voice.” “We have been able to tie sales of fundraising raffle tickets and visits directly to the new sign,” said Meredith. In fact, a teacher who passed the sign and saw a trailer for The Polar Express the week before Christmas quickly made reservations and brought her class to view the movie the next day.

“The new sign has given us a way to capture the attention of both residents and out of town visitors,” said Meredith. “More people are being exposed to this gem of a museum.”