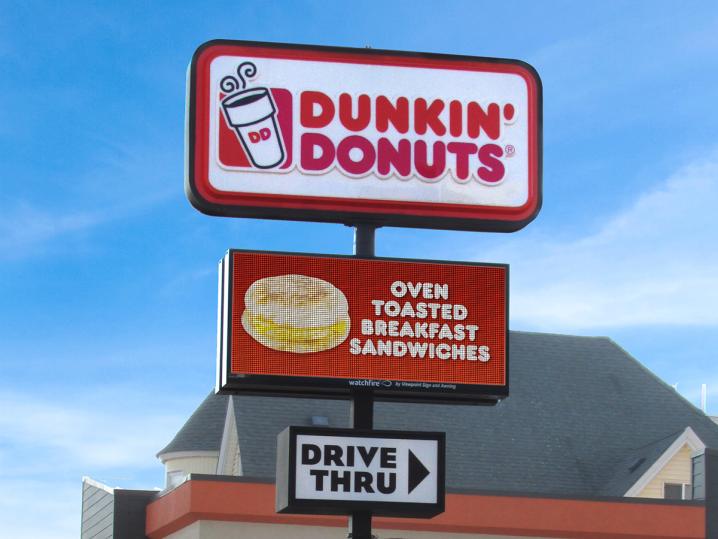 Dunkin’ franchise owner Gianna D’Angelo really understands her business. She began working the counter of a Dunkin’ franchise in Somerville, Massachusetts, at the age of 14, and for the last twenty-seven years she has been a co-owner of three franchises with her father, Pat D’Angelo. She knows what works, and in 2014 she experienced a powerful new tool in her advertising arsenal – a 19mm Watchfire LED sign.

Her Everett, Massachusetts, franchise locations are all on busy thoroughfares. This already gave her good returns but early in 2014, she added a Watchfire LED sign to her busiest location on Broadway and saw business explode. “One morning we advertised our 99 cent oatmeal on the LED sign.  The next morning, the manager called to say that we had completely sold out of oatmeal.” She began to notice that any item promoted on the sign sold fast and sold out.

D’Angelo has discovered that with the control she has with the LED display, she can quickly promote seasonal items heavily during the window for those items. As a result, she has no wasted inventory from seasonal merchandise after the sales window has closed, reducing waste and improving her bottom line.

Then she added another Watchfire LED to one of her stores on Revere Beach Parkway. She owns two stores on the parkway that are directly across from each other, which has given her an accurate method of tracking the sales impact of her LED sign. “I see the impact in sales, and so do the store managers. The manager in our one store without the LED sign is begging me to get one there so that they can keep pace. I’m already planning to purchase another LED sign for that location.”

The entire process has been easy, according to D’Angelo. From working with the Watchfire Territory Manager, to the installation of the sign, to mastering Ignite software for generating content. Programming the signs has increased communication with her store managers. “They let me know what items they’d like to promote, or inventory that we need to move while it’s fresh.” She doesn’t consider herself tech savvy, but has fun generating eye-catching promotions. “If I can figure it out,” she says, “anyone can.”

D’Angelo reports that she is keeping pace with her financial goals and believes it was a solid decision to purchase her signs from Watchfire. “Support from Watchfire has been consistently excellent.”