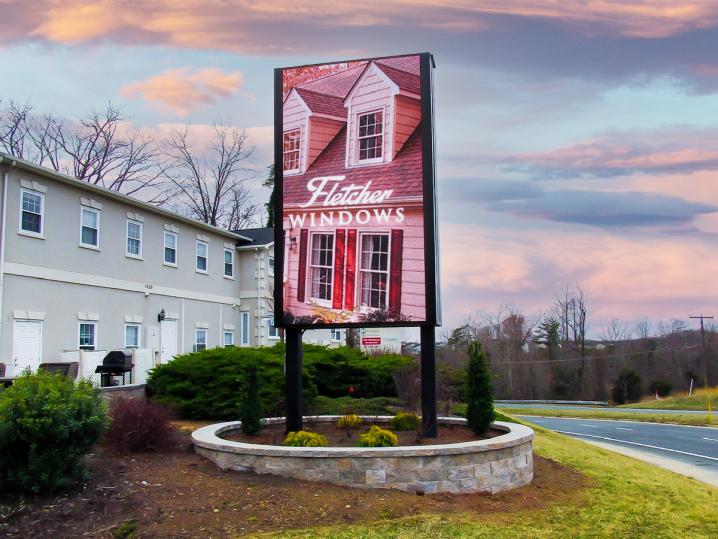 The company’s office and showroom are in a multi-tenant commercial building located along a popular commuter route to Washington, DC. Fletcher also leases office space to various dental and medical practices.

A small monument sign showcased the building's tenants. Although located on a busy thoroughfare, the office building is set back from the road, and the previous signage was inadequate for the location. Fletcher Construction owner Matt Fletcher considered replacing the building's signage to provide greater visibility for his company and his tenants.

Fletcher contacted Sign Enterprise of Fredericksburg, Va., to discuss designing and installing a new static sign that had the Fletcher Construction logo at the top and listed the tenants at the bottom.

"Jonathan Dabney at Sign Enterprise asked me if I had ever considered a digital sign," said Fletcher. "He discussed the visibility that a digital sign delivered, along with the flexibility we would have to change our messages. I was sold."

Fletcher decided to install a new two-sided Watchfire digital sign mounted vertically to grab the attention of passing traffic. He increased the size of the sign from what was initially recommended, so it would be visible to vehicles stopped at a nearby traffic light. The high-resolution sign allows Fletcher Construction to promote specials and highlight the company's various services using beautiful photography. He also runs messages for his tenants and posts messages of support for our troops.

"Since we put up the new sign, I've had people stop into the showroom and tell me they didn't know we were here. I even had someone stop in because she was planning to build a screen porch addition, and she saw on our sign that we do screen porches. There's no doubt that the sign drives business," said Fletcher.

Sign Enterprises has worked with Watchfire for many years. "Watchfire manufactures high-quality signs, and the company stands behind them," said Dabney, who has specified hundreds of Watchfire signs in the region. "We rarely have any issues with Watchfire, and their support is unmatched if we do."