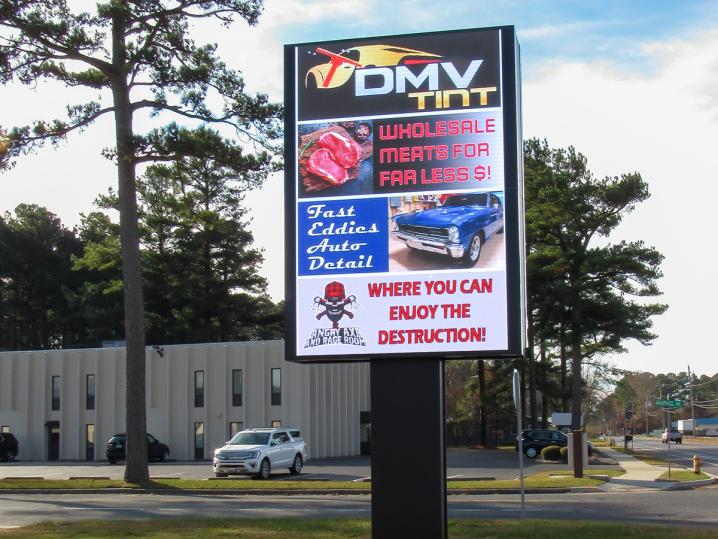 When the property was acquired by Loch Raven LLC it was only 50 percent occupied. Then a number of tenants used the change in ownership as an opportunity to leave. Faced with a dismal 30 percent occupancy rate, the owner started advertising on television, radio and social media, but the results were mediocre.

Owner Jerry Greeff was familiar with digital signs and decided to install one that would allow him to include messages about available space for lease as well as offer free advertising spots to tenants. Phillips Signs of Seaford, DE, specified a double-sided vertical digital sign from Watchfire Signs that is flexible enough to showcase multiple virtual tenant panels, as well as full screen tenant ads and “for rent” messages.

“We only specify Watchfire LED signs because they are built to last and have amazing support,” said Ben Phillips, president of Phillips Signs. “Watchfire is focused on making customers happy, and they go above and beyond to make that happen.”

The digital sign became a huge selling point for current and prospective tenants. “Our tenants are small businesses and many of them don’t even have an advertising budget,” said Greeff. “They love that they get advertising on a beautiful sign as part of their rent.”

The buildings are now fully leased with a waiting list of potential tenants, which Greeff credits to the digital sign. In addition, offering tenants free advertising on the signs has allowed Greeff to raise leasing rates. The higher rates and full occupancy have increased the value of the property.

Greeff discontinued his traditional advertising and is installing a second identical Watchfire sign on the same road but at the other end of the property. Using Ignite OPx, Greeff is able to network the signs so he can easily manage messages on both of them at the same time.

To help tenants get even more value from the digital signs, Greeff is teaming with Watchfire to run a digital advertising workshop for tenants that will help them be successful with their advertising. “These signs make a lot of sense for a property like mine because they can showcase our many tenants and give people a reason to visit them,” said Greeff.