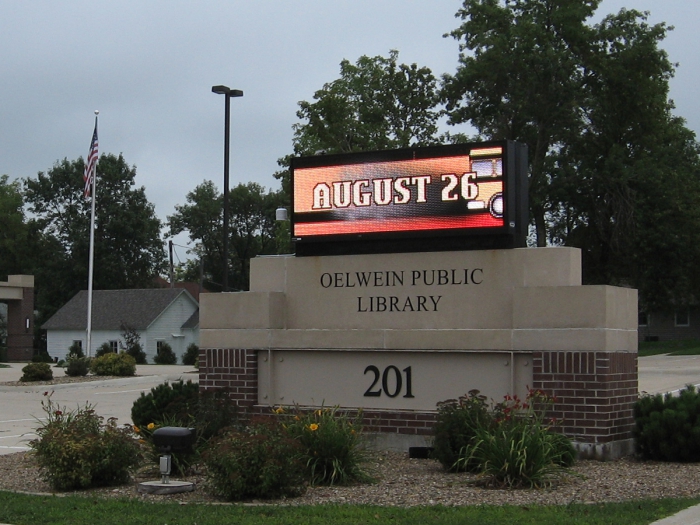 As Oelwein, Iowa, prepared to open its new public library, it was looking for innovative ways to use the space to make a meaningful impact in the community. New Library Director Susan Macken suggested the city invest in an electronic message center. After seeing LED signs at other locations, she felt it was just the dynamic, attention-getting tool the library needed to attract visitors and truly engage the community.

The old library in Oelwein had served the small town since 1917, but in 2007, it had become clear that it was no longer big enough to house the library’s growing collection. Hidden away on a side road, library received very little traffic. When the decision was made to build a new library, Library Director Susan Macken was put in charge of updating Oelwein Library’s signage.

She called Larry Cavanaugh at Nagle Signs, who recommended Watchfire products to her without hesitation. “We’ve been a Watchfire dealer for nearly 20 years now,” Cavanaugh said. “We knew right away that a Watchfire sign was what this library needed to stand out.” After seeing a Watchfire sign firsthand, Macken was in full agreement. “When Larry showed us the sign, we were very impressed,” she said. “Not only by the sign itself, but with Watchfire as a company, and how they stand behind their product.”

There was only one small problem with the demo sign, Macken said it wasn’t big enough. She wanted to ensure it would make an impact on everyone who encountered it. So when the time came to make the purchase, Macken went with an even larger Watchfire model. She had no doubt the 16mm sign would attract attention throughout the Oelwein community. But the increased attendance and community feedback surpassed her expectations.

“The comments started coming in right away,” she said. “Many in the community were very excited about it and impressed with everything it could do.” Macken’s hope in acquiring the sign was to create a sense of excitement that would lead to more traffic at the library. She wasn’t disappointed. According to Macken, with their Watchfire sign and the move to a new building the library has seen attendance increased by nearly 60 percent. Meanwhile, attendance at featured exhibits nearly doubled. Macken also noted that her entire experience with Watchfire has been uniformly pleasant and positive. “Watchfire has not only provided us with a good experience for our first outdoor electronic message center, but with a lasting connection to our community and the people in it,” Macken said.

Get a Traffic Analysis
© 2020 Watchfire Signs, LLC. All Rights Reserved.