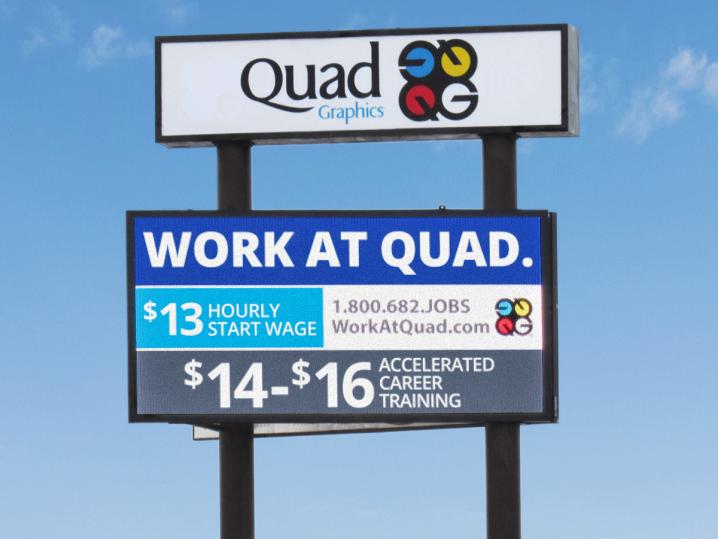 Quad/Graphics is an American business success story. Starting in an abandoned millwork factory with a rented printing press in 1971, Quad/Graphics has grown to be a global multichannel solutions provider with a strong foundation in print.

At more than 2 million square feet, the company’s Lomira, Wis., location is the single largest print-production facility in the Western Hemisphere. It specializes in printing magazines, catalogs and retail inserts.

An early adopter of LED signage, the Lomira plant has one of the largest pylon signs on US 41, the main thoroughfare connecting Green Bay to Milwaukee. When the aging message center began to fail in 2014, the company decommissioned it and installed flex faces in the cabinet.

It wasn’t long before the company felt the absence of their digital sign. “Our sign is a landmark in Lomira and the message center gave us the opportunity to reach a lot of people in a short amount of time with targeted messages,” said Plant Director Joe Gitter.

Chief among these messages are recruiting notices. “With competition for workers hitting a fever pitch the last few years, we felt having a new message center would give us another way to reach a lot of people,” Gitter said.

Long-time Quad/Graphics sign partner TLC Sign recommended a double-sided 12’ x 24’ full-color message center from Watchfire Signs. The new LED signs are the same size as the old incandescent signs, yet feature 40 times the pixels: 81,972 pixels per face compared to just over 2,000 pixels per face on the old signs. “The original signs were also from Watchfire and they performed well for years,” said TLC Sign’s Tim Cullen. “Now we have full-color signs with amazing resolution.”

Since installation, Quad/Graphics has found that the sign performs as well or better than any other advertising vehicle the company uses for recruitment, which includes radio, television, newspaper and job board advertising, as well as job fairs. “At least 30 percent of the people who fill out a job application say they found out about the opportunity from our message center,” Gitter said. “In terms of ROI, the exposure per view is very inexpensive.”

Quad/Graphics also uses the sign to build strong relationships with the community by posting messages to support local schools, events and community groups.

A Watchfire message center makes a lot of sense for any company with the right location, Gitter noted. “In our location, we have millions of people who pass by the sign every year and they are the right demographic for our messages. It all comes down to ROI and our ROI is really good.”

Check out our Blog

View success stories, tips and tricks, and the latest news about digital signage in our blog.

Go to the Blog
© 2023 Watchfire Signs, LLC. All Rights Reserved.