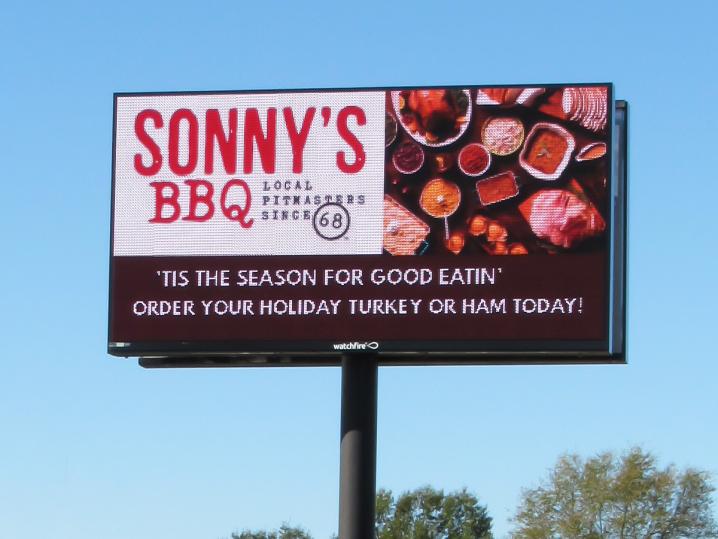 Sonny’s BBQ has served slow-smoked, real Southern barbecue in Gainesville, Fla. since 1968. Today, Sonny’s has 97 restaurants that dish out generous portions of oak-smoked meats and sides.

When it was time to update their Concord, NC, sign, franchisee Tricor Inc. decided to upgrade to a large pole mounted digital display to gain advertising impressions from nearby I-85. A portion of the LED sign would display the restaurant’s name and logo, and the rest would advertise food specials. Tricor CEO Steve Tubel networked with another Sonny’s franchisee, who recommended a sign company that offered him a “rock bottom” price.

“We got what we paid for,” said Tubel, who notes that within six months of installation the sign started failing. “At times part of the sign went black and at other times the entire sign was out. We could not advertise our promotions, and sometimes we lost our restaurant identification altogether,” said Tubel. Since Sonny’s purchased the sign from an out-of-market company, getting someone to service the sign was difficult, and finding parts was tricky. Eventually the sign company subcontracted with a local repair professional, who regularly serviced the sign until it died after five years.

During this time, Tubel learned that the franchisee whose recommendation he originally followed was now considering Watchfire Signs for their own digital displays. “The Florida franchisee was looking at Watchfire because he felt the product was superior in quality, was easy to program and came with great customer support,” said Tubel, who reached out to Watchfire to learn more.

Watchfire and sign dealer Tim Stout of Rite Lite Signs, Inc., of Concord, NC, met with Tubel and brought the Watchfire demo truck. Tubel also visited the Watchfire manufacturing facility in Danville, Ill., to see how the signs are manufactured and quality tested. Tubel installed his new Watchfire digital sign in the midst of the COVID-19 pandemic following an interior and exterior renovation of the restaurant. Sales have been up double digits since installing them. Even more impressive, when comparing March 2019, before the pandemic, with March 2021, sales at this location are up 27 percent.

“We attribute a lot of this growth to our new sign,” said Tubel. “The sign is right off the highway across from a mall. It’s like a small version of a digital billboard.” Tubel easily programs the sign himself. “It took just 90 minutes of training for me to learn the Watchfire software,” he said.