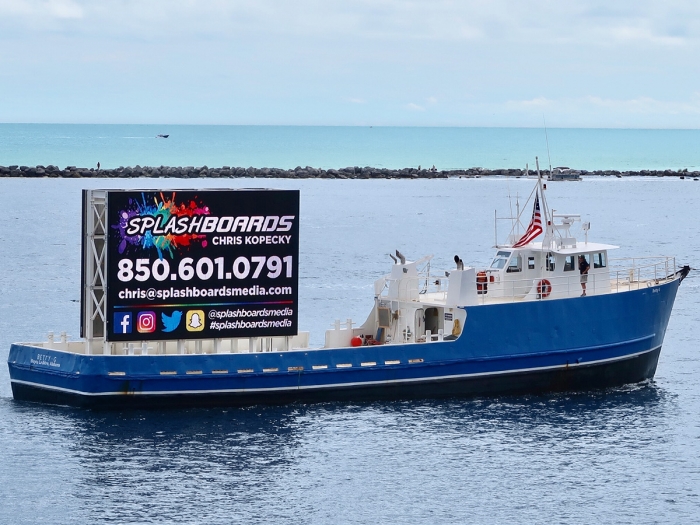 Splashboards Media, in Miramar Beach on Florida’s Emerald Coast, is the first and only watercraft billboard company operating along the Gulf of Mexico, from Pensacola to Panama City Beach.

The company’s flagship vessel is a 100-foot anchor handling ship featuring two back-to-back, 20 x 30 foot digital billboards that can be read by beachgoers from a distance of 750 feet off-shore. The billboards feature still images, video and streaming content that can garner up to 363,000 impressions per event.

In its first season, the floating billboards are making quite a splash, with more than 40 advertisers signing on.

“At the beginning of the season, we set out to prove to advertisers that beachgoers were paying attention to the billboards,” said Chris Kopecky, co-owner. “We conducted a social media campaign at the beginning of July in which we posted a selfie of a couple at the beach and asked people to send us their selfies to post. Within a minute we were deluged with photos. That showed us that visitors were paying attention to our messages.”

The ability of beachgoers to interact with the billboards makes the advertising medium unique. Recently a father, after seeing a video ad promoting a club for teens, sent a photo of his daughters kayaking with a message saying they were going.

Advertisers are taking advantage of this feature by running contests, giveaways and promotions. One restaurant recently ran a contest to win VIP seating for dinner, a valuable promotion for this standing room only establishment.

Kopecky selected Watchfire Signs to manufacture the billboards because of their quality and durability. “Without tested durability and clear, color-calibrated graphics, our Splashboards would not have as great an impact,” he said. “Watchfire’s cloud-based software is essential to our operation. From scheduling to diagnostics, we need a system that works reliably in a salt-water environment.”

Watchfire engineers worked closely with Splashboards Media from concept to execution. “Our Watchfire rep put in even more time after the sale, helping us develop rates and set schedules for advertisers. They even worked as facilitators to attract some major brand representatives,” said Kopecky, who is new to the billboard industry.

When the summer season is over on the Emerald Coast, Kopecky plans to take the boat to Tampa, Key West, Fort Lauderdale and Miami, all while planning the company’s expansion with a second boat.