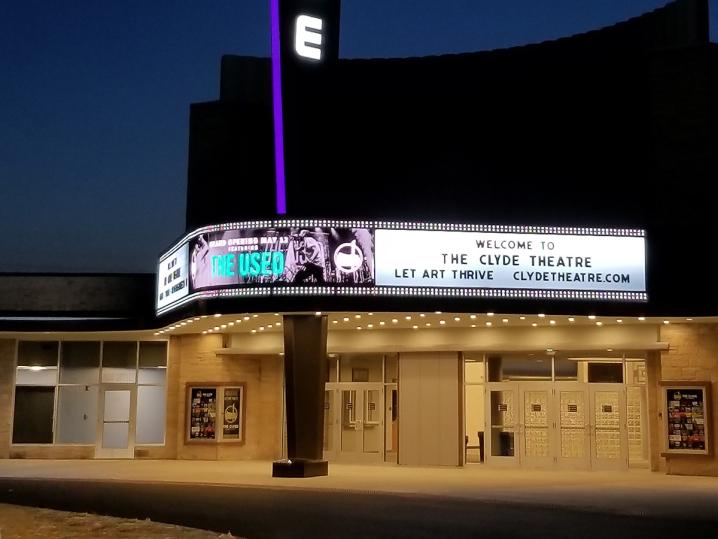 The Clyde Theatre in Fort Wayne, Ind., was designed by A.M. Strauss, an architect famous for his many landmark buildings in Indiana and Ohio throughout the early twentieth century. Built in 1951, the art deco building had fallen into disrepair in recent years and was purchased by a new owner at a tax auction in 2012.

Fund raising and research into the original architectural drawings breathed life into the project. In 2017, a major investment from the owners of Sweetwater Music Instruments & Pro Audio provided the means to begin the $9 million renovation. An important part of the renovation was recreating the building signage, which had been ripped off the facade in the 1970s.

Armed with the original blueprints, investors tapped The Baldus Company of Fort Wayne to rebuild the marquee sign and 60 foot spire. Originally a curved letter board sign that advertised current and upcoming acts, the sign designers envisioned something more modern that also paid homage to the building’s heritage.

“The inside of the theater was getting a complete upgrade, including modern sound, lighting and other conveniences, so we thought it would be appropriate to add a modern flair to the new sign,” said George Baldus, co-owner of The Baldus Company.

Baldus designed a modern marquee and letter board with a new 60 foot spire and specified a Watchfire electronic message center to anchor the board. Since current sign ordinance didn’t permit a sign of this type, Baldus had to apply for variances for the height of the spire and square footage of the digital component of the sign.

“We had under two months to construct and install the sign, and Watchfire was able to execute perfectly despite the complexity of the project and its custom radius,” said Baldus.

Today, the Clyde Theatre uses the digital message center to advertise its upcoming acts and events. Located on a busy road, the sign provides valuable advertising space to ensure the sell-out of acts in the 21,000 square foot main performance hall.

“As we finished our restoration of The Clyde, we felt it was important to give a nod to its rich history in our community. Having a replica of the original 1950s sign is such a great way to honor the heritage of the theater while giving it a modern twist. It is now a beacon in that part of town that leads music-lovers to our state-of-the-art venue," said Chuck Surack, owner of the Clyde Theater and founder of Sweetwater.