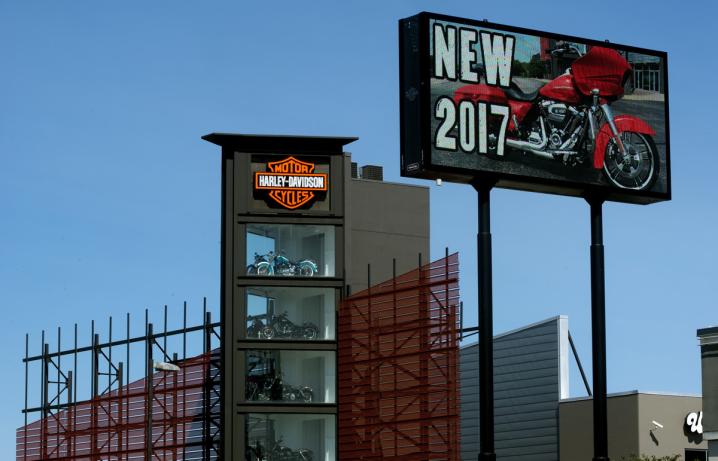 Uke's Harley-Davidson in Kenosha, Wis., knows firsthand that location can make or break a retailer. Situated just off Interstate 94, between Milwaukee and Chicago, Uke’s hit the jackpot and benefits from 78,600 vehicles driving by the store daily.

Recently though, highway improvements soured this sweet location. The highway near the store was raised five feet and a wall was built, which made the old signage too low to be easily seen and obscured it altogether from one direction. At the same time, the speed limit was raised to 70 mph. “We had to do something to upgrade our sign and make us visible again,” said owner Keith Ulicki. “I wanted to add a digital sign so we could change out the messages and capture the attention of passing motorists.”

The sign was designed by Michael’s Signs, Racine, Wis., which also completely reconditioned the building signage, including refacing and retrofitting a large set of “UKE’S” channel letters from neon illumination to LED illumination. “This is a gorgeous dealership. Once we started planning for the new pylon sign, we knew we needed to spruce up the other signage to keep pace and make it more energy efficient,” said Steve Prochaska of Michael’s Signs.

In addition to showcasing Harleys, the new digital sign is used to advertise open houses, special events, training classes, a rental program, and time and temperature. The message center has the ability to showcase video, which Uke’s plans to do. “It’s incredible how easy it is to change a message,” said Ulicki. “Our sign was installed on a Friday, so it was important for us to get messages up for the weekend. Within two hours, we had six messages up.” Ulicki also liked that Watchfire signs are high quality.

Proof of the sign’s effectiveness is in the showroom. “Everyone I talk to in the motorcycle industry tells me that floor traffic is down,” said Ulicki. “Since we installed our new signage, we are to the plus side.”