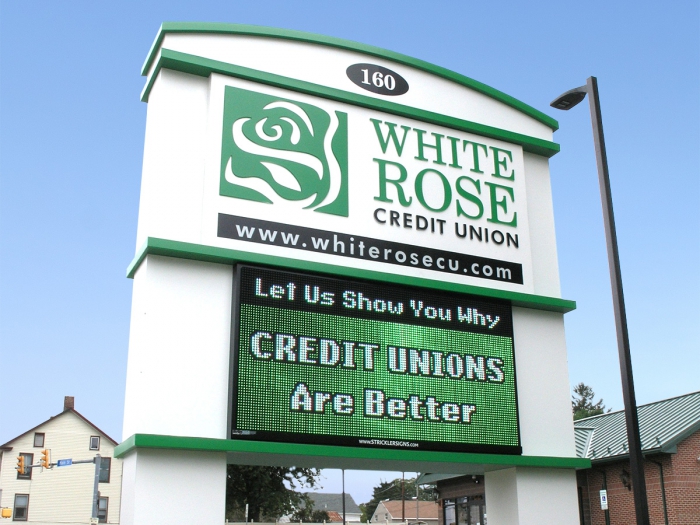 White Rose Credit Union, established in 1950, is a state-chartered financial services company with 11,000 members and five locations in York and Adams counties in Pennsylvania. The organization’s mission is to support its members and communities, so its branches regularly partner with local community groups including the Red Cross and the York Food Bank.

When White Rose opened a new location on the main street in Dallastown, a borough of York County with just 4,000 residents, it wanted a sign that would allow it to actively show its support for the community, as well as display marketing messages to help the branch grow.

Jen Swanner, marketing vice president for the credit union, turned to W.J. Strickler Signs, a company that has served the mid-Atlantic region since 1972. The company designed an 18΄ tall pylon sign with the White Rose Credit Union logo and name illuminated on top, and specified a full-color LED display from Watchfire Signs.

“This branch was a new build for us, and since we were investing in a new property, we felt it was the right time to invest in a long-term marketing platform as well,” said Swanner.

Swanner, who programs most messages on the display herself, said she regularly runs marketing messages for loans and other financial services products on the sign. However, the real bonus is being able to use the sign as a “community bulletin board.”

“We are located down the street from the local middle and high schools, so we regularly use the sign to communicate our support to students and athletes,” said Swanner. “We also run important community events, messages and reminders, and even have been asked by the borough to communicate road closures.”

White Rose’s very visible support of the community via their LED sign not only supports the organization’s mission, but also has been good for business.

“Our ROI on the sign increases almost daily,” said Swanner. “We have seen a substantial increase in both accounts and loans. We’ve had a number of students, parents and teachers become new members, and also have opened accounts for school clubs and organizations.”

Swanner says that she rotates about eight messages at a time, and she changes out marketing messages every month. In between, she is able to upload individual community messages in under five minutes.

Get a Traffic Analysis
© 2020 Watchfire Signs, LLC. All Rights Reserved.