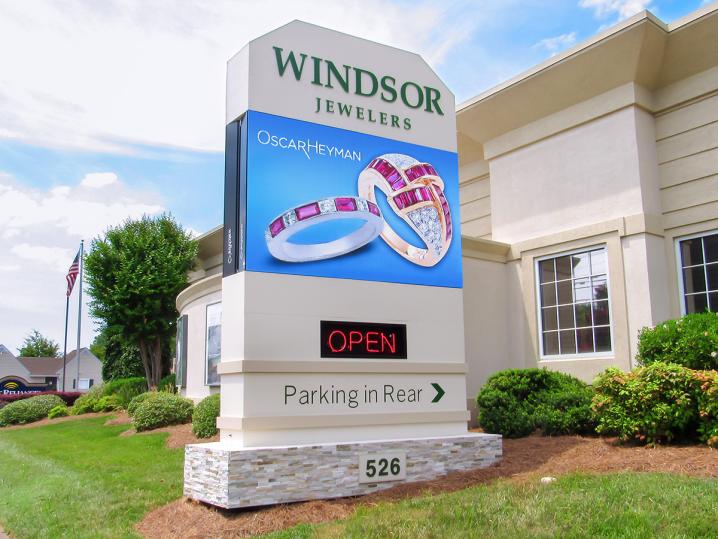 Windsor Jewelers has a rich history as North Carolina’s premier independent jewelry store, with two locations known for their beautiful contemporary, vintage and heirloom jewelry, as well as Swiss timepieces. The jeweler’s Winston-Salem store was one of the first businesses in the area to install a digital message center to reach motorists in this heavily-trafficked area. The retailer’s location is in a popular shopping, entertainment and banking district.

Unfortunately, the original digital message center purchased from a now defunct manufacturer, experienced regular performance issues, especially during times of heavy rain when modules would stop working. As the sign aged, modules began to fail, and replacement parts became more difficult to find. What’s more, after Windsor Jewelers installed their original sign, the city passed an ordinance that would require businesses to reduce the size of digital message centers by July 2023.

“With the sign’s performance issues and the new size ordinance, we felt it was time to replace the sign now instead of waiting,” said Robert Simon, president of Windsor Jewelers. Simon worked with Atlantic Sign Media, which designed and installed a tall monolithic monument sign on a stone base with the Windsor name above a double-sided LED message center manufactured by Watchfire Signs.

Windsor Jewelers uses the digital display to show eye-popping photos of jewelry and watches. “We stand out every day and especially at night and have found the sign to be valuable around the holidays when people are shopping,” said Simon. “Windsor’s previous digital sign was not high resolution,” said Joe Rickman, owner of Atlantic Sign Media, in Burlington, NC. “Watchfire brought a 6mm demo sign on site so we could see the two side-by-side and there was no comparison. It was clear that the higher resolution would more accurately showcase Windsor’s beautiful jewelry.

”Messages are programmed using Watchfire’s Ignite OPx software, which allows the retailer to update messages using any computer. The previous sign needed a dedicated computer, which had operational issues and restricted where the updates could take place. Besides resolution, the biggest difference with the new sign is reliability, according to Simon. “Watchfire’s modules are sealed against water, and this has made a huge difference in reliability. We no longer have to deal with the frustration of modules not working after it rains,” said Simon.

Reliability is why Watchfire is the only brand of LED sign that Atlantic Sign Media will specify. “Watchfire signs work as promised and are backed up with great customer service,” said Rickman.