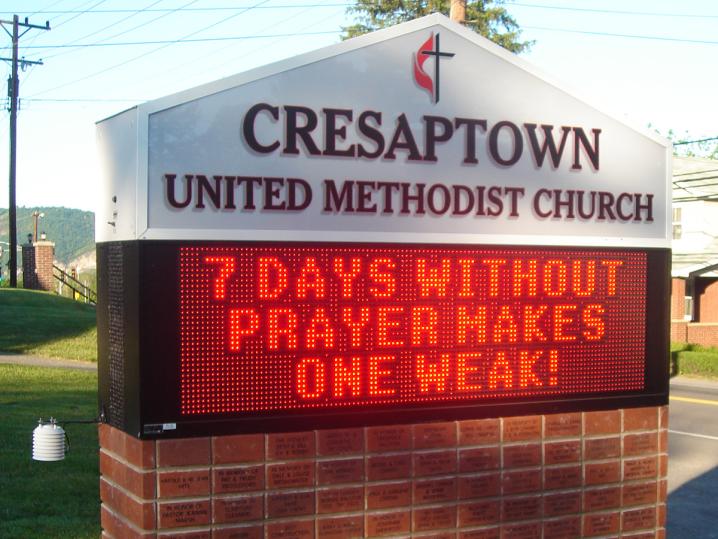 Churches have a long history of using static outdoor signs to share scripture, broadcast words of wisdom, and spread messages of hope. Old fashioned letterboard signs have served churches well, but in the 21st century, their limitations are obvious.They're hard to read; letters often go missing; messages go unchanged for a week or longer. That's why more churches are turning to electronic message centers, which let them broadcast a multiplicity of messages in bold, dynamic fashion. Keith Beeler knew an electronic message center could be a difference-maker for Cresaptown United Methodist Church. There was only one question: How to pay for it?

As Cresaptown United Methodist Church approached its 225th anniversary, Keith Beeler had an idea of how to commemorate the occasion. “I thought it was the perfect time to get an LED sign,” he said. “What a great way to show the church is alive and going strong.” Everyone at the church wanted the sign, but no one was sure how to pay for it. That's when one of Beeler's colleagues had a novel idea: to sell commemorative engraved bricks for $225 a piece. The profits would pay for the sign, and the bricks would be used as a decorative foundation for it.

“We figured out we would need to sell 125 bricks,” Beeler said. To promote the fundraiser, Beeler's son used a demo version of Watchfire's Ignite software to create a mock-up of the new sign, and showed it off in presentations during service and on the church web site. “The software really helped us sell the sign — and the bricks,” Beeler said. “Not only did we sell the 125, but we sold enough to cover all the incidental things, too.” Phil Kenney, of Kenney Signs Inc., who sold and installed the sign, was bowled over by the church's ingenuity. “Talk about a unique project,” he said. “And they made it happen. It came together nicely.”

And thanks to Kenney's help, so did the sign. “We handled installation and set a good level surface for them to stack their bricks,” Kenney said. “We even bought a brick ourselves.”

Now the church can broadcast topical messages in real time. “We recently had two couples get married in the same week, and we were able to congratulate them on the sign as they were leaving the church,” Beeler said. The sign has also helped boost attendance, and is finally getting the church noticed by passing motorists. What else can the sign do? Beeler put it this way: “The possibilities are endless.”