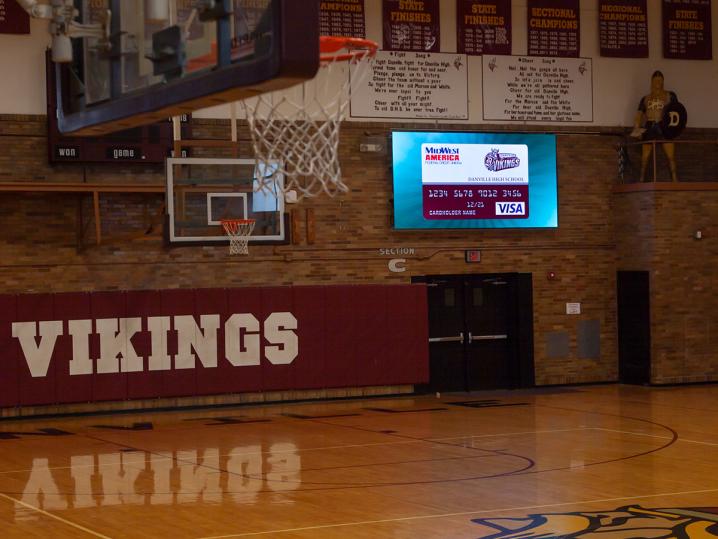 Danville High School in Danville, Ill., has about 1,500 students and offers 17 sports teams under the Vikings and Lady Vikings monikers.

When Mark Bacys joined the school as athletic director in 2018, he brought a fresh perspective to the school and quickly set out to make improvements to the athletic program.

One of the first things he focused on was replacing a broken and outdated LED sign in the school’s historic gym with a state of the art digital video display from Watchfire Signs.

“When a fan attends a college or professional sporting event, the video board adds a great deal to the excitement of the game, and we wanted the same feeling in our gymnasium,” said Bacys.

“I’ve had a number of coaches from competing schools compliment the video board, and the competing players often are dazed by the hype videos and sound,” said Bacys. “It’s also really engaging for our fans, who love to see themselves and their friends on the board.”

It wasn’t long before the men’s basketball coach realized he could use the video board to show game footage and videos of new plays and then immediately start practicing the plays. Prior to this, the team would watch videos in a classroom and then walk over to the gym to practice. Ignite Sports is easy-to-use and lets them show off images, videos, and their own custom content.

Bacys hopes the success of the gymnasium display will help pave the way for a new video display in the football stadium.

“We can demonstrate that we can help defray the cost of a video scoreboard by having students run the board, create content and sell advertising,” said Bacys. In fact, advertisers were so thrilled with the new display that the high school was able to recoup the total cost of the display in its first three months of operation.

For this first season, one student has been involved in creating content, but Bacys is working with teachers to create a multimedia class that will give more students the real-world experience of creating content for the gymnasium display and eventually a new football stadium display