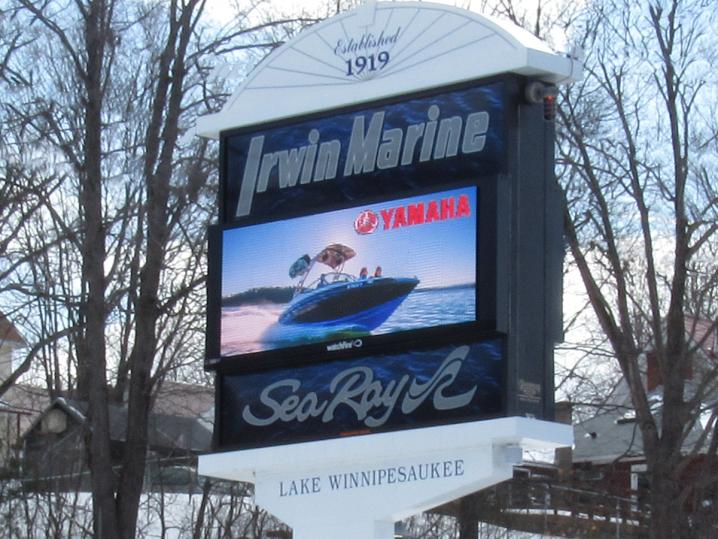 Irwin Marine in Laconia, New Hampshire, is one of the top boating dealers in the United States. The company, which partners with several different manufacturers and also sells used boats, struggled with a manual letter reader board at its Laconia location for over 20 years. They knew it limited their advertising choices, so they were excited to recently install a new Watchfire digital sign.

Management calculated that their average message was only six to eight words long, and offered no visuals for a retail business that puts a lot of stock in the beauty and image of its products. They could only showcase one vendor at a time, which limited their ability to promote specials and be responsive to the market.

The process of changing messages was time consuming and frustrating. The company estimates that they changed their manual letter sign about 1,040 times over its lifetime, which amounts to over a thousand man-hours used, and over 40,000 letters changed.

“Depending on the message, it would take up to an hour to change the letters on the sign. Because of the possibility of falling letters, cars first had to be moved away from the sign,” said Tara Galligan, marketing manager for Irwin Marine. Letters were changed with a pole, and if dropped, they would crack or break. Because the store is located near the water, mosquitoes and black flies posed a problem. Wind, rain and snow also made changing the sign a challenge.

The new sign was installed by Paquette Signs of Meredith, New Hampshire. "This new change stimulated a new paved parking entrance and stone planter at the base of the sign, which all has been most favorably accepted," said Anatole Paquette, owner and designer with Paquette Signs. "The sign greets several thousand cars per day and has become a local landmark on busy Route 3 near beautiful Lake Winapasaukee."

Now, Irwin Marine can program any number of messages to display throughout the day from the comfort of the store’s office. The company regularly rotates advertising messages for five different boat manufacturers, and includes vivid images of boats in action and other products.

Irwin Marine also uses their digital display to support community activities, such as Laconia Got Lunch!, the Easter Seals Poker Run, and the Greater Lakes Region Children’s Auction, among other events.

“Our new Watchfire sign gives us a fresh look that has drawn compliments from people coming into the dealership,” said Galligan. “Since programming messages is easy, I can update the sign in a matter of minutes. I can even preprogram the sign to welcome representatives of different boat dealers who are visiting us.”

Get a Traffic Analysis