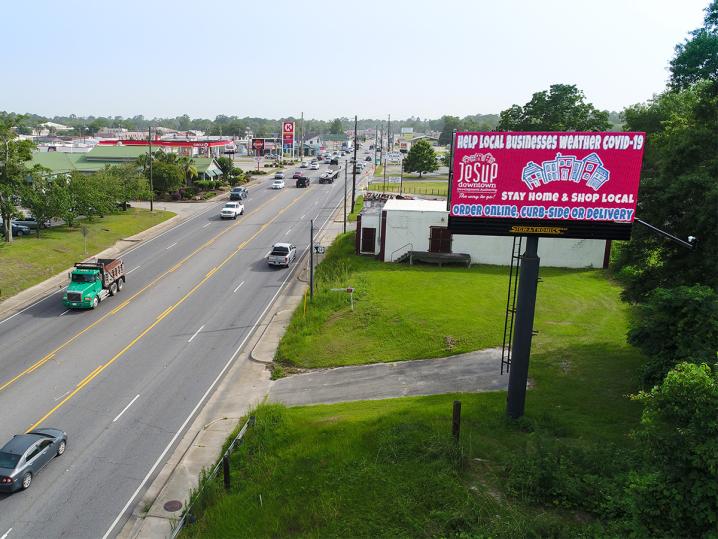 Signatronics, LLC saw the potential for a digital billboard in Jesup, Ga., a city of just 10,000 residents in rural southeast Georgia. Despite the size of Jesup, the city’s location along Highway 84, next to Hwy 341, which stretches the width of the state, made the location intriguing for Susan DeLeGal, General Manager of Signatronics.

DeLeGal, a web developer for more than 20 years, was looking for a way to expand her business and started researching digital billboards in 2013. Her first investment in digital signage was not with Watchfire.

“From the first few months, the boards were a near disaster,” said DeLeGal. “I lost count of how many service calls I made and how many times the company had to send a repair crew across country.” Unfortunately, the problems persisted. The color wasn’t pre-calibrated on the displays, modules failed, then entire sections failed. The boards didn’t come with content management software, so Signatronics had to pay for software to create and schedule ads.

“I spent a lot of money on the boards, but more importantly, I put my reputation on the line with my advertisers, many with whom I had long-term relationships,” said DeLeGal. Then one afternoon in August 2018, DeLeGal received a call from Watchfire Signs. She conveyed her history of frustration with her billboards and remained wary of manufacturers. However, DeLeGal agreed to meet with a Watchfire representative the following week.

“A month later I toured the Watchfire manufacturing facility in Illinois, and I was blown away,” said DeLeGal. “I had visited the other company as well and the differences were striking. I knew then that I wanted to replace my boards with Watchfire.” The new Signatronics digital billboards were installed in April 2020 and it has been smooth sailing since then.

“Everyone I’ve interfaced with—sales, customer success, and support—have been excellent. The customer success group even sends me tips on how to market the billboards. The responsiveness of Watchfire makes me feel like I have my own training department,” said DeLeGal.

Advertisers in the community were anxious to see if Signatronics’ issues were resolved with the new Watchfire boards. Once the quality of the new boards was evident, they started calling and texting to get their ads scheduled. Today, Signatronics’ digital billboards provide a valuable service to this rural area. “The immediacy of digital allows us to serve the community in a way other media cannot,” said DeLeGal.