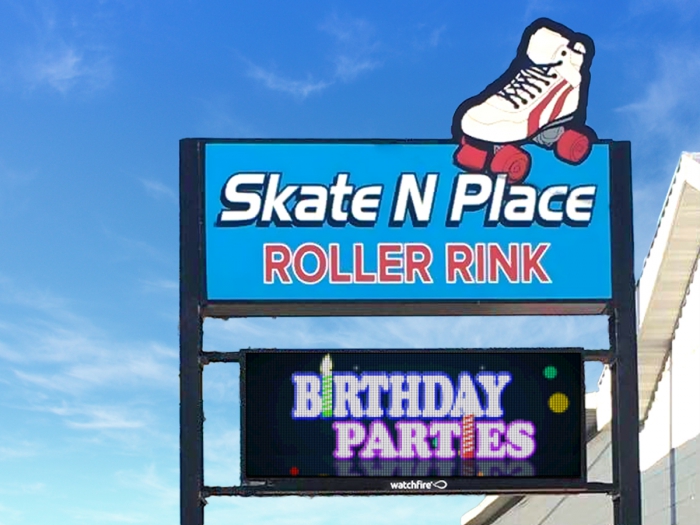 Skate ’n’ Place in Bloomington, Illinois, is an indoor roller rink that was purchased by Diane and Tim Overholser in 2014. The couple, who met each other at the rink in the 1970s, bought the rink after it closed, and decided to renovate it top to bottom.

“I couldn’t imagine not being able to go there and skate again,” said Tim, who started skating there when he was just seven. “We didn’t want to see the community lose this.” Diane was concerned that local youth would not have a safe place to hang out.

Over the next year, the rink was completely refurbished with a new roof, new paint inside and out, a new floor and sound system, renovated bathrooms and concession area, new video games and the installation of the largest roller skating pro shop in the state of Illinois.

“We did all this work on the inside of the building, but the outside didn’t reflect what was happening inside,” said Tim. After resurfacing the parking lot and updating the facility’s façade, Tim decided it was time to replace the old outdoor sign and manual reader board. “It was forty years old and there was moss growing out of it. Changing out the letters was time consuming and no one wanted to do it when the weather was bad.”

The Overholsers decided to rebrand the location with a new contoured logo cabinet featuring back-to-back LED message centers from Watchfire Signs. The sign was designed and installed by Prairie Signs of Normal, Illinois.

"The owners wanted to send a message that said the rink was back in business and that the facility was completely upgraded," said Clayton Follin, Prairie Signs. "The new sign gave them the opportunity to advertise themselves for much less than traditional media."

“Once I found out from the city that more than 3 million vehicles a year drive by our facility, investing in digital signage was a no-brainer,” said Tim. “The new sign completely changed the curb appeal of the building, and our business has definitely picked up since we installed it.”

The Overholsers easily program the new sign with as many as 20-30 different messages a day to appeal to its various audiences, including using cartoon characters when kids will be driving by with their parents. “With my digital sign, I can do unlimited advertising,” said Tim.

“Before our new sign, people just drove by and didn’t really notice us. Now, there’s something new to grab the attention of drivers and passengers," said Tim.