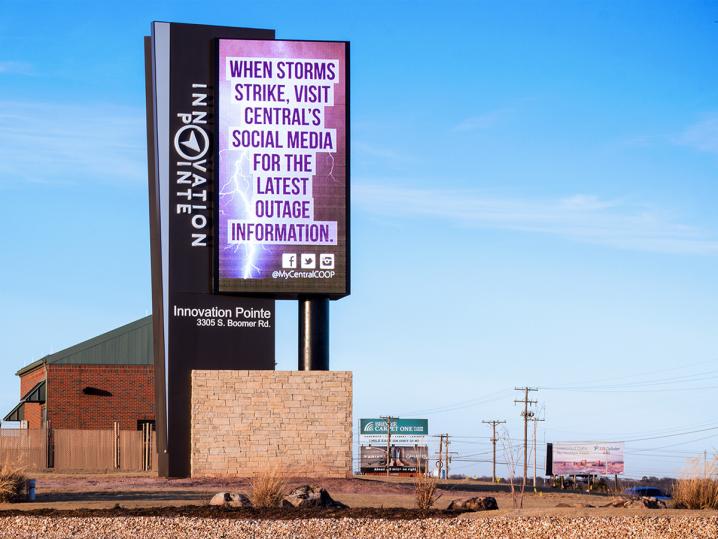 The Innovation Pointe campus in Stillwater, Okla., is an innovation district that provides the resources to make businesses successful. It all began in 2016 when Central Electric Cooperative, an electric distribution cooperative that serves more than 20,000 meters in seven central Oklahoma counties, constructed a new headquarters with the vision of drawing more renewable energy companies this new business park.

The cooperative envisioned campus signage that would make a statement and give them flexibility in messaging, so they turned to MetroSign Corporation of Oklahoma City.

“Central had a good idea of what they were looking for to create a bold statement,” said Bill Fair, senior account executive at MetroSign. “We suggested some modifications and specified Watchfire Signs because we find their signs to be the most reliable in the region’s hot summers. Watchfire’s five-year product warranty and MetroSign’s five-year labor warranty sealed the deal.”

“As an electric co-op that’s owned by our members, we try to provide members as much information as possible,” said Larry Mattox, director of communications at Central Electric Cooperative. “Our new Watchfire message centers really fit our proactive style of communicating.”

Central broadcasts a wide variety of messages on the new signs, including safety promotions, community events and help wanted information.

“Three-quarters of our members live within a 25 mile radius of Innovation Pointe, and our location on a major route into Stillwater provides these messages with a lot of exposure to our members,” said Mattox. In fact, since turning on the new sign in the fall of 2017, Central has been able to cut back on some newspaper advertising.

Surprisingly, the new sign has become a popular landmark where residents take selfies for posting on social media. For Veteran’s Day, Central asked its members to send in photos of family veterans to feature on the signage, then ran consecutive messages featuring the vets. “We had vets sitting and watching the slideshow, taking selfies in front of the sign and posting on social media,” said Mattox. “It’s been a great community builder.”