Watchfire Turns Stadium into a Classroom 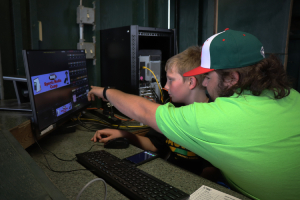 Watchfire Signs partnered with Neuhoff Media and Danville Area Community College (DACC) in Danville, IL to teach students the basic skills of the sports media business, including video board operation.

In its 24th year, the Sports Media Camp is a week-long, interactive program for students twelve to eighteen years old. The program includes participation at local Danville Dans games, a collegiate summer baseball team, where campers try their hands at play-by-play, color commentary, and public address announcing. This year, video board operation was added to the hands-on curriculum.

“We’re proud to be part of this innovative program,” said Watchfire’s Mary Ellen Fricke. “By including the Watchfire display and Ignite Sports software in the program, we added new lessons in design, math, cloud technology, and critical thinking. Operating the video board during a live event is the ultimate in immersive learning.”

Watchfire converted the visitor’s press box into an onsite editing room where camper created animated crowd prompts like “Make Some Noise.” The campers learned about design, timing, and motion. The content was displayed on the video board the next inning.

“My favorite part of the whole week is running the video board,” said fourteen year old C.J. Lucky. “It’s fun. I like touching a button in the press box and it shows up out there. Everyone sees it. The crowd cheers when I show the strike out animation.”

Referring to Watchfire’s Ignite Sports, Lucky added, “This is the perfect software for this. It is so easy. I learned it fast. By the end of the inning, I was running everything all by myself. No one told me what to do.”

“Running the video board empowers the kids. They make their own content decisions and get instant feedback from the crowd,” said Jaruseski. “Plus, it’s neat knowing that you control something as cool as that Watchfire board. That’s kind of big league.”

Fricke said the program was a success and is eager to expand it next year. “During the game, I spent more time watching the campers than I spent looking at the display. Their faces lit up every time new content was published. You have to love that.”