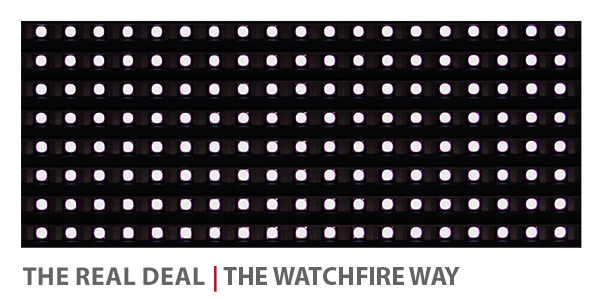 Pixel pitch is a common way the sign industry describes an LED sign’s resolution. A pixel is comprised of a single grouping or cluster of LED diodes – typically one red, one blue and one green. The pixel may share a lens, as in the case of a surface mount diode, or it may be made up of three separate LEDs.

The simple rule of thumb is that a lower pitch measurement, where each cluster is close together, results in a higher quality image. Unfortunately, some manufacturers have introduced alternative pixel distance calculations as a way to reduce costs.  These configurations are often marketed as “virtual,” “enhanced,” or “optimized.” Here is a look at a few different pixel options and how they impact image quality.

True pixel configurations are measured from the center of each pixel and do not rely on sharing LEDs. Watchfire’s 10mm uses a surface mount device (SMD) that contains red, green and blue under a single lens. This produces a high-quality display that provides exceptional resolution for crisp, vivid content and wide viewing angles. 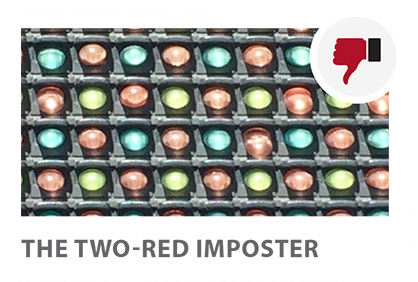 Virtual pixel configurations are set up completely different. In order to pass off a lower resolution product, some manufacturers will add a second red LED to each cluster. This configuration results in a pixel that has two red, one blue and one green LED. Then to claim the product is high resolution, these deceitful manufacturers will market it based on the measurement between each individual LED. The product will be marketed as an optimized 10mm, but in reality it has a true pixel pitch of 20mm. 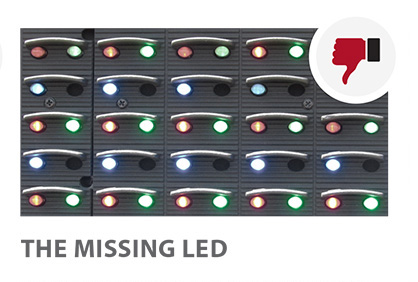 Another way some manufacturers are being deceptive is by using a technique known as LED sharing to claim a higher resolution. LEDs are shared to neighboring pixels to complete a grouping, effectively counting some LEDs up to four times. This layout has visibly larger spaces between LEDs and may even give the appearance that an LED is missing from the board layout. To market this configuration, pitch is measured between overlapping pixels so that the product can be promoted at a much higher resolution than it actually delivers. 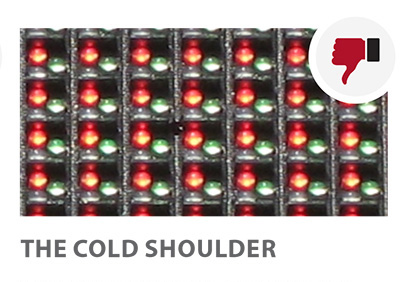 Some manufacturers also use through-hole LEDs for higher resolution products like a true 10mm sign. Placing individual red, green and blue LEDs into a circuit board with 10mm spacing creates a product that is not robust enough for long term reliability. This configuration also creates an issue known as shouldering, where the LED lenses block the light of neighboring diodes. Shouldering results in limited viewing angles and can make the display look discolored when it is viewed off-center.

Savvy customers understand that a true pixel configuration delivers the best display performance. Your local Watchfire representative is ready to answer any of your questions, and can show you a side-by-side comparison.